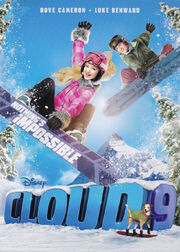 Cloud 9 is a Disney Channel Original Movie (DCOM). It was premiered on January 17, 2014 along with the brand new teen comedy series, I Didn't Do It.

The story of " Cloud 9" follows Kayla, a prima donna snowboarder who was just unceremoniously dropped from her team and forced to train with Will, a former snowboarding champion who’s struggling after a career-ending wipe-out. A video capturing it went viral, branding him an “epic fail” on the Internet. Now, as Kayla trains with Will to redeem her stature, Will creates a training regimen that tests whether she’s really committed to rise to the challenge of professional competition. Meanwhile, Kayla must somehow maneuver to inspire Will to overcome his biggest obstacle — self-doubt and more

Retrieved from "https://cloud9.fandom.com/wiki/Cloud_9?oldid=8013"
Community content is available under CC-BY-SA unless otherwise noted.